SUMMARY: The United States Geological Survey (USGS) established a monitoring well at our Lafayette North Water Treatment Plant in 2001. This well was drilled to a depth to sample the top of the Chicot Aquifer. The water plant and monitoring well are located near known surface contamination. Data collected from this well since 2001 demonstrate that in spite of the existence of a clay confining layer above the Chicot Aquifer, contaminants flowed down into the aquifer which is our sole source for drinking water in Lafayette Parish. These findings are consistent with other evidence, and support the recommendation that action is urgently needed to protect our Chicot Aquifer.


Introduction
Old rail lines and railroad maintenance and switching yards are typically contaminated with a long list of toxic substances including arsenic which was extensively used at rail sites as a preservative for railroad ties, poles and structures, as a weed killer, and as a pesticide. Citizens are concerned because our north drinking water treatment plant and many of our Lafayette Utilities System municipal water wells are adjacent to the old rail line and just north of the former Lafayette railyard.


Lafayette's municipal wells draw our drinking water from the Chicot Aquifer which has been designated as our sole-source aquifer. Parish citizens have been assured that our local geology protects our sole-source of drinking water from contamination because an impermeable clay confining layer separates the contaminated surface from our water well intakes deep in the Lower Sand formation of the Chicot Aquifer. This assertion of protection has been made for decades despite clear evidence that it isn’t true. I will provide additional evidence of this contamination in a future post. Here, I describe observations of Chicot Aquifer arsenic contamination in samples from the monitoring well at the downtown Lafayette North Water Treatment Plant.


USGS Monitoring Wells
In 2001 through 2002, the United States Geological Survey installed 28 shallow monitoring wells throughout Lafayette Parish (Figure 1) to survey levels of shallow groundwater contamination (Fendick and Tollett, 2004). Wells were placed in urban, residential, and light commercial areas. These wells were drilled to a depth that reached the top of the upper sand of the Chicot Aquifer (Figure 2). This monitoring was a part of the USGS National Water Quality Assessment Program. 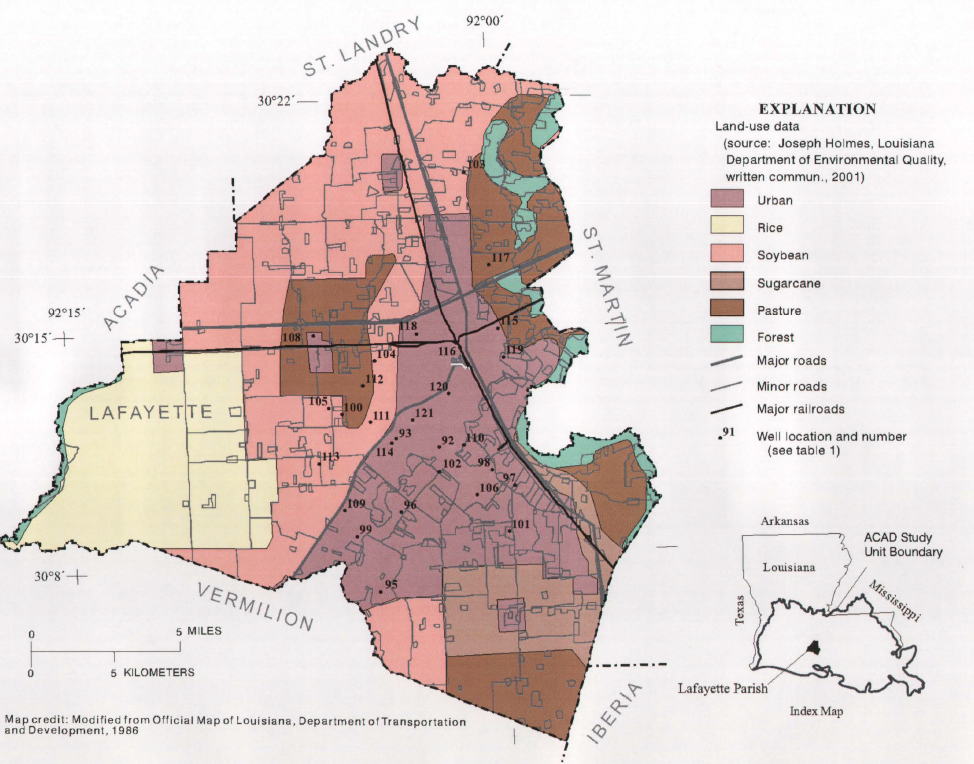 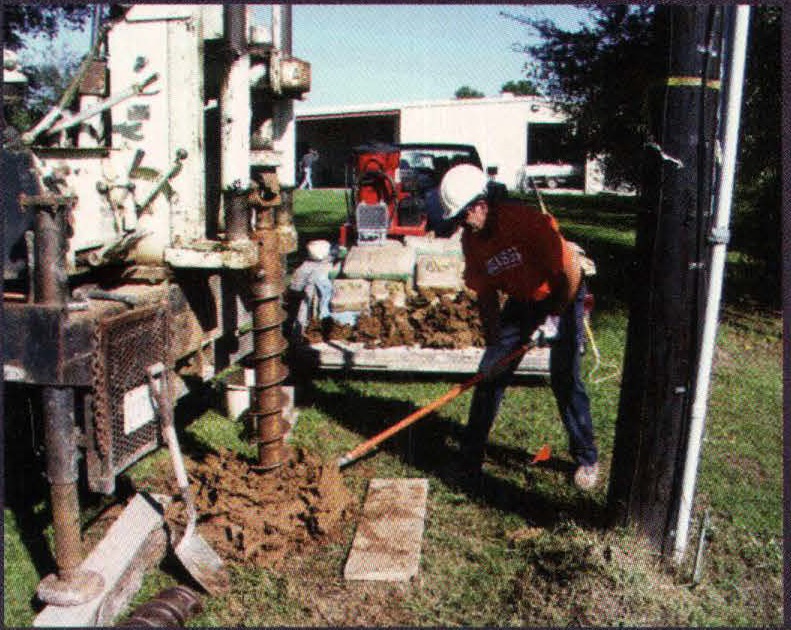 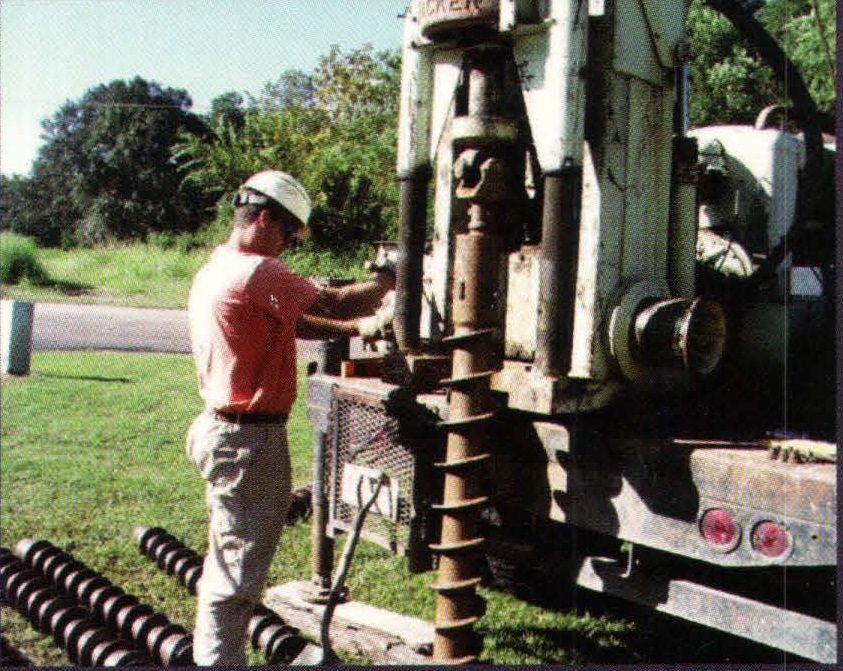 Figure 2. Photos of monitoring well installation from Fendick and Tollett (2004).


One of these wells designated well number 116 in the report (USGS site 301355092005601) was installed at the Lafayette North water treatment plant. The well was drilled to sample water from 55 to 65 feet below surface in the Upper Sand of the Chicot Aquifer. This site is near several of our municipal water wells, and is within a few hundred feet of railroad track which has been in use for over a century (Figure 3).

Figure 3. Google maps image showing the approximate location of monitoring well 116 as red marker in upper right of the image (personal communication, Rolland Tollett, 2017). Note the proximity of the well with the railroad track which parallels Sherman St.


Arsenic Contamination
Among all the 28 Lafayette Parish monitoring wells, well #116 at the Lafayette North Water Treatment Plant had the highest measured arsenic concentration (Figure 4.). Arsenic and creosote are the most common contaminants associated with rail operations that occurred from the 1800s up to the 1960s (Connector Comments, 2017). Arsenic was used as a wood preservative for rail ties and other wood, for killing weeds, and for killing pests. Arsenic contamination is also a legacy contaminant in areas that were cotton fields in the 1800s and first half of the 1900s. It is not the topic of discussion here, but it is interesting to note that well #113 which has the second highest arsenic concentration (Figure 4) is located at the LUS South Water Treatment Plant. The South Treatment Plant is surrounded by agricultural fields which may have legacy arsenic from pesticide applications, and has a total water production capacity similar to the North Water Treatment Plant. Pumping at both plants may be increasing the rate with which contaminants are drawn into the Chicot Aquifer. 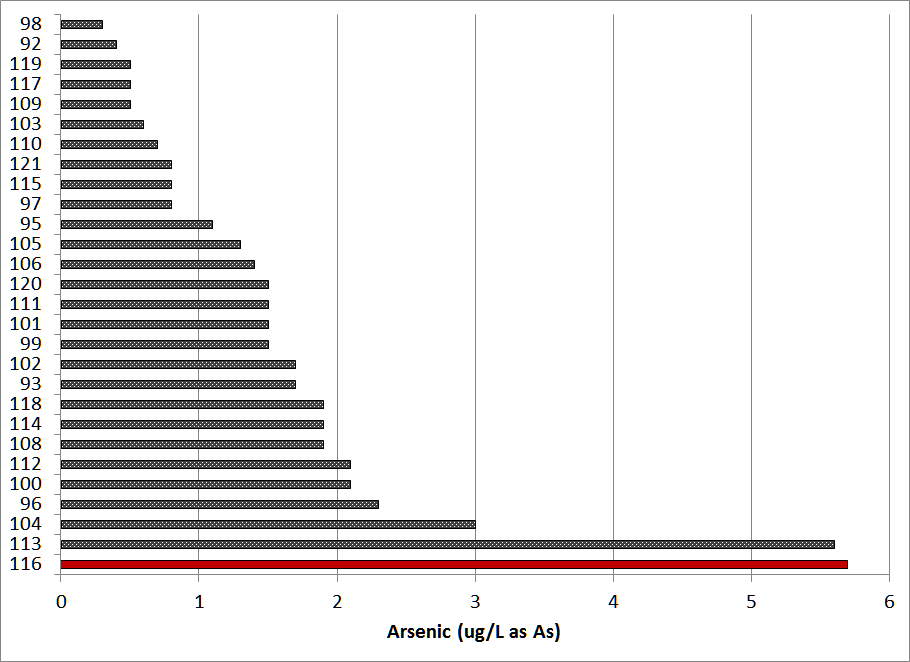 Figure 4. Well ID numbers are displayed on the vertical axis. Arsenic concentration measured from 2001 to 2002 in micrograms per liter as arsenic from the 28 Lafayette Parish monitoring wells in Lafayette Parish show well 116 (solid red bar) had the highest concentration of 5.7 ug/L  (Fendick and Tollett, 2004). 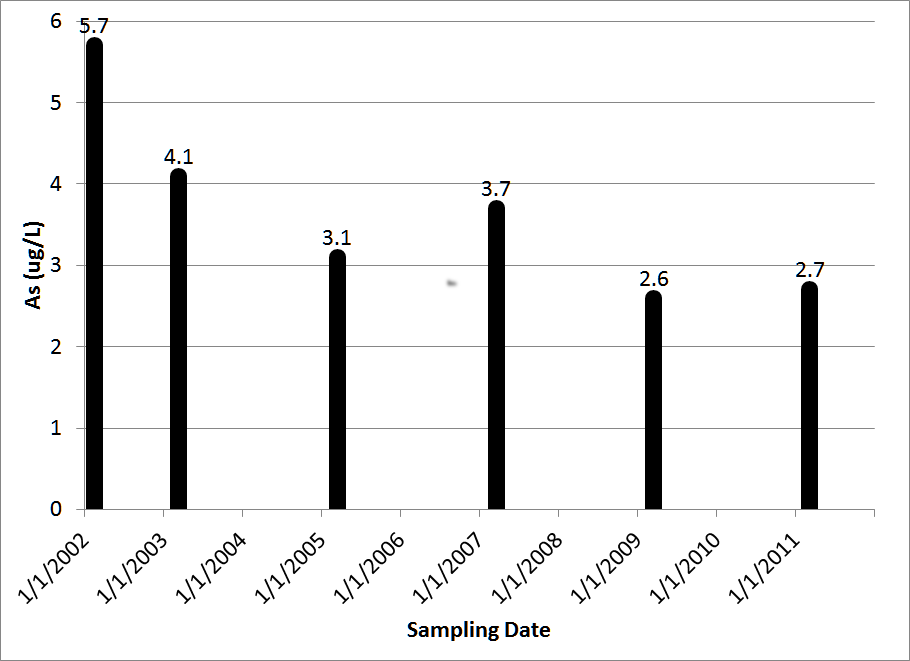 Figure 5. Arsenic concentrations at well #116 continue to be elevated throughout all available monitoring history  (Fendick and Tollett, 2004).

Frederick and Tollett (2004) also used CFC concentrations and other data to estimate the apparent age of the groundwater in the Upper Sand of the Chicot Aquifer in Lafayette Parish. They found the apparent age of the groundwater varied with water level and ranged from about 12 to 50 years with a median of less than 32 years. Well #116 at the LUS North Water Treatment Plant had an apparent groundwater age of 41 years. Water age estimates the average time that water has been present in the underground formation. Therefore, the contaminated water contributing arsenic to the mix is probably much younger than the average age which should include at least some very old water. These CFC age estimates are further discussed by Darling (2005). Those findings provided clear evidence that groundwater recharge from surface water is common throughout Lafayette Parish, and this local recharge can lead to groundwater contamination.


Well Water Level
Data shows that the water level (termed the static head which is a measure of the pressure in the aquifer) in well #116 is dropping over time. Water level in this well in November 2001 when it was first measured was 45.72 feet below land surface. In the most recent available measurement taken in April 2014, the water level had fallen to 48.56 feet below ground surface. The observed head confirms that the well is indeed sampling within the Upper Sand of the Chicot Aquifer, and that there is a strong hydrologic connection between this sand and the Lower Sand below it where most of our drinking water is withdrawn. The large difference in head (i.e. pressure) between the surface aquifer above and the Upper Sand of the Chicot aquifer below it drives a flux of water and contaminants moving into the Upper Sand. A future post may provide further interpretations of Chicot Aquifer groundwater head measurement data. 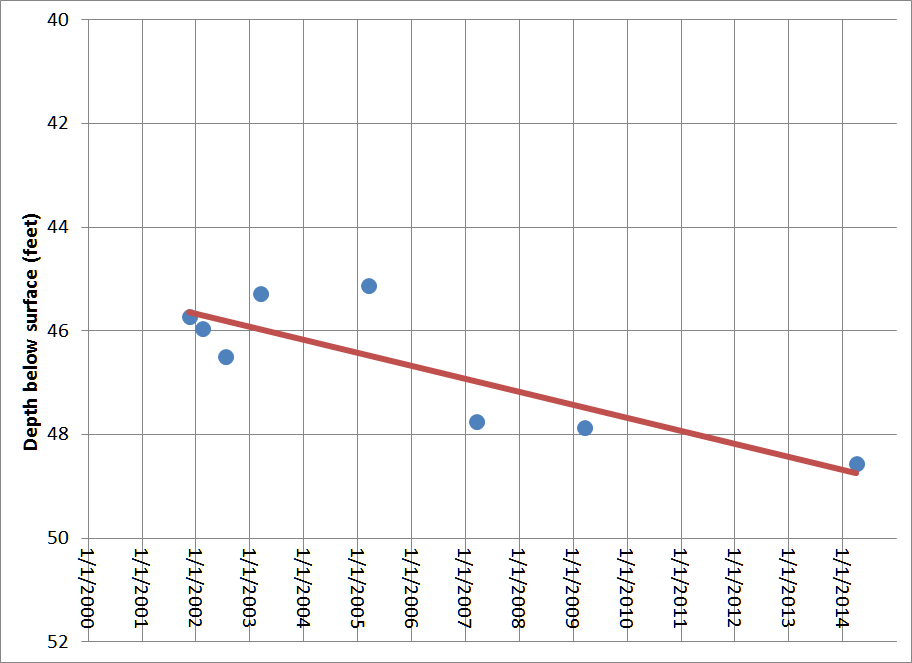 Figure 6. Head of water observed in well #116 in feet below the ground surface is plotted. Elevation of the ground surface at the well is 39 feet (1929 NGVD). The solid red line is an Excel generated trend line through the data points which is dropping at approximately 2.6 feet per decade.


Conclusions
Lafayette Parish inherited a plentiful and sustainable drinking water resource in the Chicot Aquifer. The findings presented here, as well as numerous other lines of evidence, lead to the conclusion that the Chicot Aquifer in Lafayette is at risk. Although a confining layer may impede flow, it does not stop surface contaminants from entering and contaminating the aquifer. Data from USGS monitoring well #116 demonstrates that surface contamination in the vicinity of a number of our Lafayette municipal water wells has and does reach the Chicot Aquifer.


The Chicot Aquifer is a resource which could provide water resources for many future generations. It is our responsibility to protect this inheritance. However, neglect and mismanagement can rapidly destroy this legacy.
Acknowledgement
The data presented here were downloaded from the USGS online National Water Information System (NWIS) public data server. Except where cited, all interpretations and opinions are those of the author, Michael Waldon.


References
Darling, B. K. (2005). "Age-Dating of Lafayette Parish Ground Water: a Basis for Understanding Recharge and the Potential for Contamination." LBG-Guyton Associates (figures for this report are available at a separate link).