Is it possible that the Louisiana DOTD would build an interstate without considering flood impacts?

By examining at some internet photos of last year's flooding you can see clearly that the answer is YES.

Here is a photo of flooding in Baton Rouge provided by Atmosphere Ariel to KTBS in August 2016. 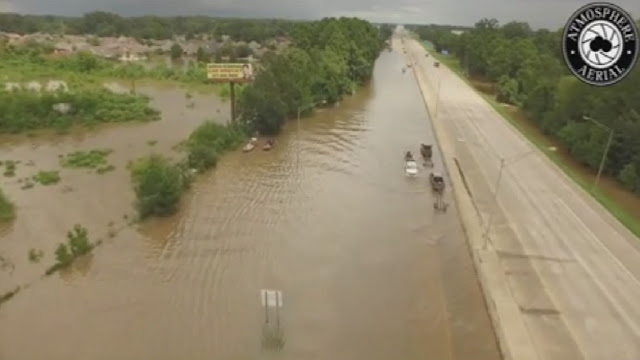 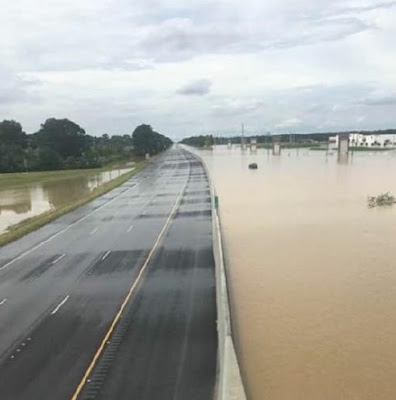 An article in the Livingston Parish news states


The lawsuit says a 19-mile concrete barrier, from East Baton Rouge Parish to the Walker area in Livingston Parish is “acting as a man-made flood wall that interrupts the natural flow of surface waters.”


Is it possible that DOTD built these lane dividers without considering that they would act as a dam during heavy rain? It appears again that the answer is YES.

Now, the Louisiana DOTD wants to add large amounts of impervious surface in Lafayette by building the I-49 Con. Incredibly, the only mention of flood impacts in their Environmental Impact Statement is that they just plan to drain the roadway into local drainage or directly to the Vermilion. While they have taken decades to plan the I-49 Con, they have given the citizens of Lafayette nothing to gauge its flooding impacts. In past presentations, we have been told to trust them. We have been told that flooding analysis will be part of their final design. But, flood impact analysis should be a central part of the Environmental Impact Statement for public scrutiny and comment. Just ask the mayor of Walker how much he trusts DOTD's flood design expertise!

Proper flood mitigation would likely require construction of a large retention pond on land with an elevation above the highest historic flood height. Any private developer in our parish would be required to build retention/detention, but the DOTD is not constrained by local ordinances. I do not see any available large tract of land available within our urban center to accommodate the retention pond. Bypass alternatives to the east along the Teche Ridge, or west following the proposed LRX route would both have ample rural land available for such mitigation.

The Chicot Aquifer "impermeable barrier assumption" has been questioned by geologists for decades.


This post reprints a comment by Dennis G. Sullivan which was submitted to the DOTD on January 23, 2016. The comment was also published online by the Sierra Club. As a retired well log analyst,  Dennis Sullivan is an expert in the interpretation of geological data. His comment is reprinted with permission. His post cites US Geological Survey research on the inadequacy of the Chicot Aquifer confining layer to protect the source of our Lafayette drinking water from contamination. His comments are now especially relevant since surface contaminants have been monitored in Lafayette's drinking water wells and citizen organizations are recommending that specific actions be taken by our parish leadership which include development of a wellhead protection program to protect the sole-source of our drinking water, the Chicot Aquifer.


Thank-you DOTD for the opportunity to submit a comment into the record today.  I would like to begin by thanking you for the resources made available on the internet at your Connector website.  In the course my investigations there I found the following document particularly useful:  Water Resources Technical Report No. 73: Thickness of the Chicot Aquifer System Surficial Confining Unit and location of Shallow Sands, Southwestern Louisiana.  This is a study written by B. Pierre Sargent of the U.S. Geological Survey in 2004.  It appears to have been commissioned by DOTD.  In layman’s terms it’s a study of the surface clays that function to “seal” the top of our primary source of drinking water in Southwestern Louisiana, The Chicot Aquifer fresh water sand.  This paper gathers data from well logs and recorded well screen depths of registered water wells to estimate how thick the protective clays (called the surficial confining unit) are and how prevalent shallow sands might be within this stratum.  Among the things that I found interesting were the following quoted items:
“…interbedded sands are collectively known as the shallow sands of the Chicot Aquifer system.  The shallow sands occur irregularly throughout the confining unit and may be hydraulically connected to underlying sediments (Chicot).”  p. 1
“The impermeable barrier assumption has been reconsidered in recent years because of various incidents of subsurface contamination. Trudeau, 1994 p. 2, Hanor, 1993 showed that the effective vertical hydraulic conductivity of surficial clay at a hazardous waste disposal site in southeastern Louisiana was as much as four orders of magnitude higher than reported laboratory measurements of clay core samples taken from the site.  Hanor attributed the difference to the presence of minor sand beds and to secondary porosity and fracturing that occurred during deposition and aerial weathering of the clay beds.”  p. 2
“Although the thickness of the confining unit may be relatively uniform across large areas, interbedded sands of varied areal extent and thickness are present within the confining unit.  These sands are collectively known as the shallow sands of the Chicot aquifer system.”  P. 2
“Jones and others (1956) described two areas where the depth to major sand is less than 50 ft. thick.  One area is in southern Vernon and Rapides Parishes…and the other follows the course of the Vermilion River through Lafayette, St. Martin, and Vermilion Parishes.” p. 5
“An exception to the southward thickening (of the surficial confining unit – dgs) occurs in parts of Vermilion and Lafayette Parishes along the approximate route of the Vermilion River (fig. 1) where the confining unit thins to between 40 and 80 ft. thick (fig. 3).”  p. 9
“In Lafayette Parish, wells screened in shallow sands are at depths less than 50 ft. in the eastern and central parts of the parish…” p. 22
“This report provides a basis for collection of more detailed information about the transmissivity of the confining unit and the nature of the interconnection and relation between the confining unit and the deeper hydrogeological units of the aquifer.”  p. 4
A 2007 legal decision (No. 06-30570, Consolidated Companies, Inc. v. Union Pacific Railroad Co, et. al) has indicated that past railroad activities have allowed soils to become contaminated to varying depths including the 8 ft. and the 20 ft. levels in a substantial area of the planned footprint of the elevated Connector.
There is therefore reason, I believe, to exercise special caution in the construction of an elevated Connector through this area of known pollution.  Considering the Chicot Aquifer’s importance as the primary source of drinking water for the majority of the residents of the City of Lafayette and all residents of Southwestern Louisiana, I respectfully request that the construction requirements for the Connector be elevated above “industrial” to the highest standard of precaution in all construction activities involving sub surface excavation of any kind.  To do anything less would be foolhardy and potentially dangerous to the health and safety of the citizens of our city and state.
D.G.Sullivan

Sargent, B. Pierre (2004) Thickness of the Chicot Aquifer system surficial confining unit and location of shallow sands, Southwestern Louisiana. Louisiana Department of Transportation and Development in cooperation with the US Geological Survey, Water Resources Technical Report No. 73.