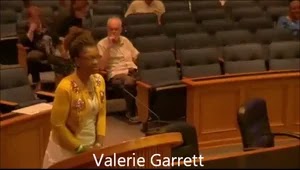 (Why is there a $200 million problem looming at LFT? Be sure to read to the end to find out.)

View the 12 minute video of the airport update by clicking here or view it in the frame at the bottom of this post.


The I-49 Connector plan requires moving a runway at LFT -

Dr. Michael Waldon asked during public comment if the runway displacement required by the I-49 Connector project would result in any changes to the renovations. He also cited his minimum safety requirement calculation that shows that the displacement would need to be 860 feet rather than the 350 feet stated in the I-49 FEIS. This calculation was published last year in the ConnectorComments.org post titled Airport angles and increased risk. Mr. Picou replied that he had not seen the published recalculation of the displacement. Further, he said that new FAA regulations would require an additional 1000 feet of runway if it is reconstructed. Mr. Picou stated that the airport "has hired a firm to look at that information." Currently the airport is constructing an EMAS system (engineered materials arrestor system) at the end of this runway. He also said that Dr. Kam Movassaghi had led a student design project that might eliminate or reduce the required displacement, but DOTD has not reported any study of such options.

The bombshell of the evening occurred when Councilman Theriot followed up by asking what the cost would be. Mr. Picou replied that a rough order-of-magnitude estimate is $200 million dollars. In part, this cost is so high because the FAA would no longer allow the use of an EMAS at this end of the runway, which results in an added runway length requirement of 1000 feet.

While there may be intergovernmental discussion of which tax dollars will fund this $200 million (or more), in the every case it is taxpayers who will pay and citizens who will suffer added flooding from the loss of flood storage currently provided to Lafayette and St. Martin Parish residents by the Cypress Island Swamp. 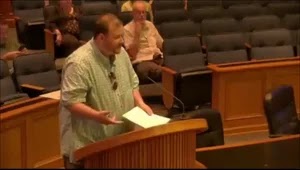 The Lafayette Consolidated Government Council meetings are open to the public, and citizens may make comments within the scope of each agenda item. Furthermore, 5 minute comments on any subject are taken monthly at the second monthly meeting. This month, June 2017, eight citizens brought issues before the Council (click for video of all comments) during the June open comment period.

The following is a list of speakers and the subject of their comments. Links in the list will take you directly to the start of each citizen's comment.

Next month open comments should be scheduled during the July 25, 2017 meeting, and we hope that some of the issues brought forward this month will be addressed by Council members at that time. Immediately following that July 25 meeting, the Council will initiate their budget review process which should lead to significant citizen comment.

Video of the entire 3 hour meeting which was recorded by the Acadiana Open Channel Community Media may be viewed at http://www.ustream.tv/recorded/104993499
A pdf file of the meeting agenda is available here.

Make your ideas known through public comment to our Lafayette Parish Council.

Have you wanted to address our city/parish leadership about a particular concern or a great new idea or suggestion? You can! Learn how from a short video tutorial that is now available thanks to Simon Mahan and the Lafayette Electrical Discussion.

Our Lafayette City-Parish Council has nine members, with one member representing each of nine districts. It meets twice per month at 5:30 PM in the City-Parish Council Auditorium of the City-Parish Hall at the corner of University and St. Landry. Usually, meetings are held on the first and third Tuesday, but you should check the on-line schedule in case holidays or other reasons led to a rescheduling. Unrestricted public comment is accepted only at the second monthly meeting (that is, usually the third Tuesday of the month).

The Lafayette Public Utilities Authority (LPUA) is the governing authority of the Utilities Department and consists of five City-Parish Council members whose districts include 60 percent or more of persons/citizens residing within the boundaries of the city of Lafayette.  The LPUA meets regularly on the first and third Tuesday of the month in City-Parish Hall at 4:30 p.m. prior to the full Council meeting.

Lafayette Council meetings and LPUA meetings are aired live on AOC 2 which is channel 16 on Cox Cable and channel 4 on LUS Fiber Cable. The meetings are also rebroadcast at later dates; check cable schedules for times.

Please comment on plans for the LRX: Interstate bypass alternatives 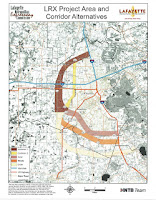 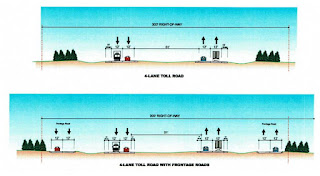 The LRX bypass will allow through traffic to avoid passing through Lafayette's urban core, and should relieve the city of much of its heavy truck and hazardous cargo traffic. It would also draw traffic away from some of the heaviest traffic areas of the Parish.

The infrastructure solutions firm, HNTB, gave one-on-one presentations to the public during the LMEC open house. We were told that meeting materials would be posted on the LMEC web site after the meetings. That information is not yet posted, but I have scanned the meeting handouts which are available through these links:


Public comment on LRX planning has now been requested as a part of the project's Tier 1 Environmental Impact Statement (EIS). Completion of this EIS is anticipated at the end of this year. I urge all readers of this blog to comment, share, and ask friends to submit comments. Although our state and local politicians have financial and legal constraints that limit describing the LRX as an alternative to the I-49 Con, the obvious fact  is that both would be competing parallel roadways, and funding completion of either makes it unlikely the other will ever be built! These projects are in a competition for priority and funds. Now it is up to the public to declare their preference.
The third document, the questionnaire and comment form, should be submitted to the email or postal address given at the bottom of the form. There is no set deadline for submitting public comment, but I believe it would be best to send in your comments within the next 2 weeks, and certainly by the end of June. Emailed comments should be sent to kbprejean@hntb.com

Last night, June 6, 2017, I attended the LRX open house public meeting at the East Regional Library in Youngsville. This evening from 5:30 to 7:30 there is a second meeting with the same format and materials being held at the  Scott City Hall, 109 Lions Club Road, Scott. This very short post is written to give tonight's attendees a heads up about what to expect, and also gives everyone not attending a bit of information.

The open house format of the meeting means you may expect to take 20 minutes to an hour looking at posters and speaking one-on-one with staff from HNTB about the project that they are contracted to lead. I learned that they are doing the EIS (Environmental Impact Statement) for the project in "tiers." They plan to complete the Tier 1 EIS in December.

There were 3 handouts provided at the meeting


The questionnaire/comment sheet can be turned in at the meeting, or sent later by mail or email. I plan to scan and email mine so that I keep a copy for my records. You can download copies of the handouts from my Google Drive folder.

No deadline was given for submitting comments, but I assume they should be sent expeditiously.

Finally, they stated that all meeting materials would be available on their web page, Lafayette Metropolitan Expressway Commission, after the second meeting.

Public meetings announced on the LRX: An alternative to the I-49 Connector?

The Lafayette Regional Xpressway, LRX, is a western interstate bypass planned to go west of Lafayette. The Lafayette Metropolitan Expressway Commission has invited you to two Public Meetings with the same open-house meeting format in two locations:

The Daily Journal of Commerce, Louisiana and Mississippi reported on July 5 last year that "it's been roughly five years since any significant public discussion of the project" and "the commission had paused planning for the bypass so as not to compete for attention with the proposed Interstate 49 Connector (emphasis added)." Work and appropriations for the LRX have been continuing, however. In January 2016 an agency meeting reported progress on the EIS and tentative selection of a preferred alternative route.

Finally after this long delay, the public will be allowed to see what secret progress has been made over the years on this alternative routing for I-49! As always, DOTD will tell us again that "this is not an alternative I-49 route," but I think it is abundantly clear that only one, if any, of these interstate projects will be funded over the next 50 years.