Today, citizens continue to "battle a proposal that is, on its face, senseless." Now the senseless plan is called the I-49 Con.

The citizens of Lafayette fully support the extension of I-49 South. We strongly support a
Lafayette eastern bypass and are deeply opposed to an elevated interstate thru the heart of
our city. In July, 1992, a public meeting was held after an EIS was distributed of the Evangeline
Thruway corridor plan. Citizens voiced overwhelming opposition resulting in its withdrawal. In
1997, the project was restarted by DOTD at the urging of the chamber of Commerce leadership
who have relentlessly pursued the Evangeline Thruway placement. New strategy! Lead the
public to believe that other alternatives are being considered. Many reasonably assumed that the
1992 official public rejection eliminated Evangeline Thruway. Wrong! Residents realized very
late thai the "alternatives" were all simply "variations" of the previously rejected Thruway plan.

I am a spokesperson for a campaign by The Sierra Club, Citizens Speak Out, Sterling Grove
Historic Association, Tree Society of Acadiana, Annabelle Subdivision Association, and others
joined to promote an I-49 eastern bypass. Our petition has over 1000 signatures with more added
each day. Lafayette citizens arc now at risk from the 50,000 vehicles per day on Evangeline
Thruway, many hauling hazardous materials. Why plan to increase the risk with 100,000 daily
estimated for completed I-49? Proponents insist an eastern bypass was studied and rejected.
Rejected by whom? Where are the studies? Why choose this destruction and danger to our
community? ls it simply a price the local power structure is willing to pay to keep the project all
within Lafayette Parish - avoid sharing with our neighbor, St. Martin?

We are told a Lafayette eastern bypass would impact wetlands (though their plan requires moving
a runway at our airport into wetlands). Harold Schoeffler, a well known businessman and
environmentalist and Pierce Meleton, respected architect, and others actually mapped out a route
to the east between Breaux Bridge and Lafayette into St. Martin. It runs beyond Cypress Island
Swamp but west of the beautiful Teche thru sugar cane fields and pasture land coming back into
90 below Broussard. Destroys no homes or businesses. Gives St. Martin needed interstate
access and avoids the adverse impacts in Lafayette. Be vastly superior for evacuation- with two
highways out rather than the one sure to become an elevated trap in Lafayette. When taken to
highway engineers cost estimates were about half that of cutting thru lafayette. Likely you were
sent the St. Martin resolution asking that the Teche Ridge alternative be considered.

Citizens must battle to save themselves from a proposal that is, on its face, senseless? Impacts
to the human and natural environment so enormous that governments' talk of "mitigation" is a
joke in the community. An elevated federal interstate alongside a national historic district?
Elderly, poor and minorities disproportionately impacted? Their sector of the city walled of!?
Please do what you can.

A manufactured gas plant in Lafayette? And why Lafayette needs a drinking water protection program?

You know the idiom "carrying coals to Newcastle." It refers to taking something to a place where it already exists in abundance. It seems that this would apply to manufacturing gas from coal and/or oil in Louisiana, so let me explain.
By 1900, Lafayette's residents had both water and electricity as residential utilities. However, in the early 1920's there was still no natural gas pipeline carrying gas to Lafayette, and no residential or industrial gas utility available. To respond to this demand, the Louisiana Public Service Company built a manufactured gas plant and ran pipes to service Lafayette residences in 1926 (Griffin, 1959).  The gas plant was located north of the railyard (Figure 1). In 1931, a natural gas pipeline reached Lafayette from Northern Louisiana, and operation of the manufactured gas plant was discontinued.

While this history is interesting, you may be wondering "how is a former manufactured gas plant site related to the I-49 Connector issues?" It is another likely source of contamination endangering the Chicot Aquifer which is designated as the sole-source of drinking water for Lafayette Parish. Before we design or construct this interstate over our water wells and sites of contamination we need to quantify the threat and plan how to deal with it for ourselves and our children.

Throughout North America, high levels of soil and groundwater contamination have been discovered at former manufactured gas plant (FMGP) sites. The USEPA has listed former manufactured gas sites in its priority site list (Hathaway.net, undated), and this includes a site in Lake Charles, Louisiana (page 1004, Hathaway, A.W., 2011). Significant quantities of waste "tar" was produced during the gas manufacturing process, and this waste was often simply disposed of on-site in open pits. Waste products created by the manufacturing process that are now associated with FMGP sites include (Heritage Research Center, 2007):

The proximity of the FMGP site to our Lafayette drinking water wells (Figure 2) heightens the already existing  concern over contamination of our Chicot Aquifer. Monitoring has already clearly established that surface contaminants are finding their way into our wells (Connector Comments, 2017a, and 2017b).

In a letter proposing recommended actions to our local political leadership, the Acadiana Group of the Sierra Club and the WaterMark Alliance recommendation #10 was to draft and adopt ordinances based on LDEQ drinking water protection sample ordinances. The presence of yet another risk to our drinking water further demonstrates the need for a Lafayette drinking water protection plan, an ongoing program, and protective ordinances. The Chicot Aquifer beneath Lafayette is a plentiful source of water, but its quality can be compromised for present and future generations if we fail to protect it. 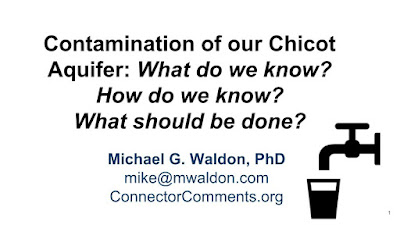 The Concerned Citizens for Good Government (CCGG) held its regular 1st meeting of the month on Monday, April 3, 2017 at Alesi’s Pizza House in Lafayette, LA.  Guest speaker was Michael Waldon, PhD, and retired licensed professional environmental engineer. The title of the presentation was: Contamination of our Chicot Aquifer.  What do we know? How do we know? What should be done? WaterMark Alliance spokesperson Kim Goodell also gave an update to pending litigation and the I-49 Project. As always, there was an opportunity to ask pertinent questions at the end of the presentation.

If you missed the meeting, you can still participate. Click the following links to learn more about the meeting"

Additionally, you can still participate by sharing to Facebook or other media using the share buttons below, and by adding your ideas and questions in the comments section. If you feel strongly about the issue, please contact our political leaders. Our local leaders' contact information is available by clicking HERE.