Restoring NEPA procedures to protect the public and taxpayers 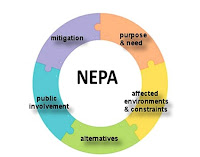 The National Environmental Policy Act (NEPA) is the law that ensures that you can have a voice in federal decisions. During the previous administration, changes were made to the way NEPA is implemented. These changes were intended to streamline the process and allow federal projects to be approved more quickly. Although a goal of speeding up federal bureaucracy is laudable, the streamlining was at the expense of public scrutiny rather than streamlining the internal working of government agencies and contractors. Currently, there is a Phase I proposal that would begin to restore the right of the public to be involved. This proposed rulemaking is available for public comment until November 22, 2021. Yesterday, I submitted the following comments.

NEPA is not just an environmental law, it is a GOOD GOVERNMENT law. NEPA requires that federal agencies think before they act and allow the public to critically review proposed actions. I am submitting this comment to support CEQ’s proposed phase 1 rules. Furthermore, I ask that CEQ quickly initiate phase 2 rulemaking with robust public involvement so that NEPA is fully restored.

Public review and comment are essential safeguards against wasteful, harmful, and ill-conceived large government projects. For years, NEPA protected public health and the environment. But, that is not all. By allowing the public to examine proposed plans and designs, citizens have exposed deficiencies and errors before they became costly mistakes. NEPA has saved government agencies from making huge costly blunders.

I am commenting as an individual, but I am a member of my local Sierra Club and the Y-49 group in Lafayette who oppose construction of a new urban section of I-49 through the heart of our city. Additionally, I participate in the Louisiana Four Corners Coalition which is seeking reform of Louisiana transportation decision-making through increased public scrutiny and input. Here, I illustrate the importance of NEPA with two examples from these citizen groups and my own experience.

My first example shows how NEPA procedures can raise awareness of risks associated with proposed projects. As a retired environmental engineer, I first became alarmed about the public health and financial risks of the proposed Lafayette I-49 urban interstate project. This project has been opposed for decades by local citizens and citizen groups. As part of a developing supplemental environmental impact statement, the Louisiana DOTD contractors revised the design and proposed constructing an elevated interstate over a federally recognized and un-remediated hazardous chemical site that is just over a thousand feet from Lafayette municipal drinking water wells. The elevated roadway would be supported on pilings that extend deep into our city’s drinking water aquifer. This project not only endangers our drinking water source, but could also move financial liability from the potentially responsible party to the taxpayers. We continue to oppose this dangerous and ill-conceived plan through NEPA mandated public input.

My second example involves an apparent design error that came to light during NEPA mandated public review. While reviewing the I-49 proposed urban interstate plan I became alarmed by the roadway design which proposed constructing an elevated overpass interchange with University Avenue flying over I-49 at the edge of our Lafayette airport. This tall structure was going to be positioned just past the end of one of our city’s runways. The EIS wanted to fill an area of wetland and shift the runway a few hundred feet east in order to meet FAA safety requirements. This small shift just didn’t seem sufficiently safe to me, so I did my own calculation using FAA guidance to see how far the runway needed to move. My calculation showed that a much larger shift was needed to meet FAA regulations. I submitted my calculation as a comment for the developing SEIS, and also wrote a blog post (ConnectorComments.org) detailing my calculation. I never even received a confirmation from DOTD that they received my comment. However, I can only assume that DOTD and their contractors agreed with my analysis because after I submitted that comment the plan was changed to tunnel University Avenue under the interstate rather than flying over it.

What would the environmental and financial consequences have been for residents of Lafayette if the NEPA process had been abbreviated? How much has NEPA’s required public involvement reduced the risk to our city’s drinking water and public health? How much waste would have happened before correction of the intersection design at the end of our airport runway?