Evangeline Corridor Initiative - Your comments are due March 29, 2018


The Evangeline Corridor Initiative or ECI (formerly called the TIGER grant initiative) began over 2 years ago when the Lafayette government received a planning grant from the Federal government of $300,000, and matched this with an even larger local tax match. This planning effort is deeply intertwined with the Lafayette I-49 Connector's own tens of millions of tax dollars spent for planning. The ECI is now coming to an end, and it is time for the citizens to examine and comment on what we the taxpayers and residents got for our money.

The Evangeline Thruway Redevelopment Team (ETRT) at its March 12 meeting, accepted a draft Final ECI Plan and recommended the plan be made available for public comment. Two public "open house" style meetings (that is, public meetings where the public informed but is not invited to publicly speak) were held on March 21 and 22 to provide the public with information about the Evangeline Thruway Redevelopment Team (ETRT) plans for our community in the area surrounding the proposed I-49 Connector.  You can read more about the ECI through their web site which redirects you to their Lafayette Parish government page: www.evangelinecorridor.com

At these March open house meetings, representatives from Lafayette Consolidated Government, the ECI's professional consulting team, and the ETRT were on hand and were available to answer questions from citizens one-on-one. The 175 page ECI draft Final Report/Action Plan is available in print at the Rosa Parks Transportation Center at 101 Jefferson Blvd. To download the Report to your device click here. Public comments on the report are due Thursday, March 29, 2018 at noon. I urge every Lafayette citizen to examine this draft report and other materials from the ECI web site and submit their own comments on the draft plan. You may also comment on other relevant issues that should have been addressed in the study. In order to comment, you may

Don't forget, the deadline for comments on the draft final report is noon on Thursday, March 29! 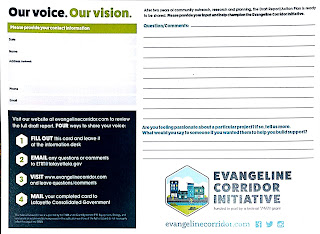 Thanks to all who provide their input on this plan.

These comments related to the March 2018 ECI Open House Meetings and the Draft Final ECI Report. They are submitted by Dr. Michael G. Waldon, 110 Seville Blvd, Lafayette. I live in City/Parish District 3. I do wish to thank the ECI team for consideration of my concerns.

There is very strong opposition to the I-49 Connector throughout Lafayette Parish, and this opposition is particularly intense within the ECI corridor. There have been hundreds of citizens who have attended meetings to voice their opposition to this project. Opposition has been intense for a very long time, at least since the first EIS was presented almost two decades ago. Now, the ECI planned projects are presented as a carrot in a final desperate attempt to lure opponents into grudging support. This strategy will not work!

The public is not so foolish that they will believe that suddenly a district that has seen neglect for a century will suddenly become a target for local expenditures. The truth is that nothing in this plan is funded, and no funding mechanism has been identified. We see that the local government can’t be bothered to even maintain the property they already have within the Corridor. Why should we believe that the parish will suddenly have funds for new playgrounds in pocket parks, or even have money to keep the grass cut. Put simply, we are on our own. The I-49 spector reduces property values for Corridor homeowners today, and if it ever is funded for construction, it will destroy these communities and turn them into urban deserts.
In supporting Lafayette’s application for additional millions of dollars of federal grant funds for continuation of the TIGER project, one councilman responded to our opposition to continuation of the TIGER funding at a Parish Council meeting. To paraphrase, he said that if we don’t spend the federal money someone else will. This hardly seems to be the prudent way we, the taxpayers, hope our elected representatives will spend our money. I urge all who are given the responsibility to allocate our tax dollars will use good judgement and spend our taxes as prudently as if spending their own money. Simply spending for the sake of spending? I say no!

We have been assured that if there is strong local opposition the I-49 Connector (we call it the I-49 Con) will never get federal construction funds. If that is the truth, then the Con will never be built.

Therefore, I conclude, the first thing to decide is - Will the I-49 Connector really be built? If yes, then drop all of these projects in the draft final report because there will be no community left to use them. And, if no - the I-49 Con will never be built - then we do not need the ECI. The Evangeline Corridor will bloom with renewed life if this spector of future destruction is removed. Property values will increase, private investment will return, and - note to our Council - tax revenues will grow. Let us hope that we stop spending federal money just for spending sake, and pursue alternative like the LRX, the planned Lafayette western bypass.

My recommendation for the Final Report is to state early and clearly that the ECI report does not endorse the I-49 Connector, and that funding, construction, and maintenance of these projects is in no way dependent on the Con. Alternatively, state clearly that these projects are being proposed to mitigate the tragic destruction of our communities that will result from building the urban interstate through our city’s heart.


Pedestrian friendly
Throughout the draft final report I see the words “pedestrian” and “pedestrian friendly.” Sidewalks were not built so that utilities would have a place to put their poles! Before we pursue other pedestrian friendly ideas, we need to set a Parish-wide policy that new utility poles will never again be placed in our sidewalks or placed such that pedestrians or handicapped individuals in wheelchairs need to move into traffic to avoid the pole. Placing poles or other obstacles in our sidewalks is not only a safety issue, but also is a statement that pedestrians are valued far less than cars in our community.

Hurricane Evacuation Capacity is Essential
Before, during construction, or after the vaporous I-49 Connector project is realized, the current capacity for hurricane evacuation must at a minimum be maintained on the Evangeline Thruway itself. If ever funded and constructed, the elevated roadway will provide limited resilience in the face of heavy rain and wind. As residents of Louisiana we know that elevated roads get blocked easily. High winds and rain preceding the storm may even force closure of the interstate to high profile vehicles like trucks. Hurricane evacuees often cannot buy gasoline because of long lines or loss of power. On a surface road, out-of-gas cars can more easily be move out of traffic. However, experience shows that long bridges are often blocked by out-of-gas cars.
This is very relevant to any ECI plans along the Thruway. Until the surface level western bypass, the Lafayette Regional Xpressway or LRX, or other bypass is built I would not support any changes that “calm traffic” or reduce roadway capacity on the current Evangeline Thruway.

City property
I commend the City/Parish leaders for showing an interest in the Evangeline Corridor area of our city. The neglect that this area has experienced in the past is clear. A recurring comment by residents at meeting that I attended was the lack of simple maintenance of city-owned and LUS property in the Corridor. The city seems unable to regularly mow the grass and keep up the appearance of their property in this area. This not only contributes to a blighted appearance, but also, right or wrong, makes us think that the residents of this area of Lafayette are less important to the powerful interests in charge of the city. Only now, when a plan to further destroy these communities with a six lane urban interstate through its heart do we hear of highway administration funds giving us unfunded plans for new projects. If you can not cut the grass and paint your fences, why should the public believe any of these dreams will ever be a priority?

Here are examples of properties which are not properly maintained:

At the meetings, residents gave a number other examples with which I was not familiar. In summary, the ECI draft final plan seems hypocritical when we see the apparent neglect received for care of City properties within the corridor.

LUS Well 10 at Moss St at Park is abandoned and clearly looks the part! The photo is also available at the link https://goo.gl/f21aZn 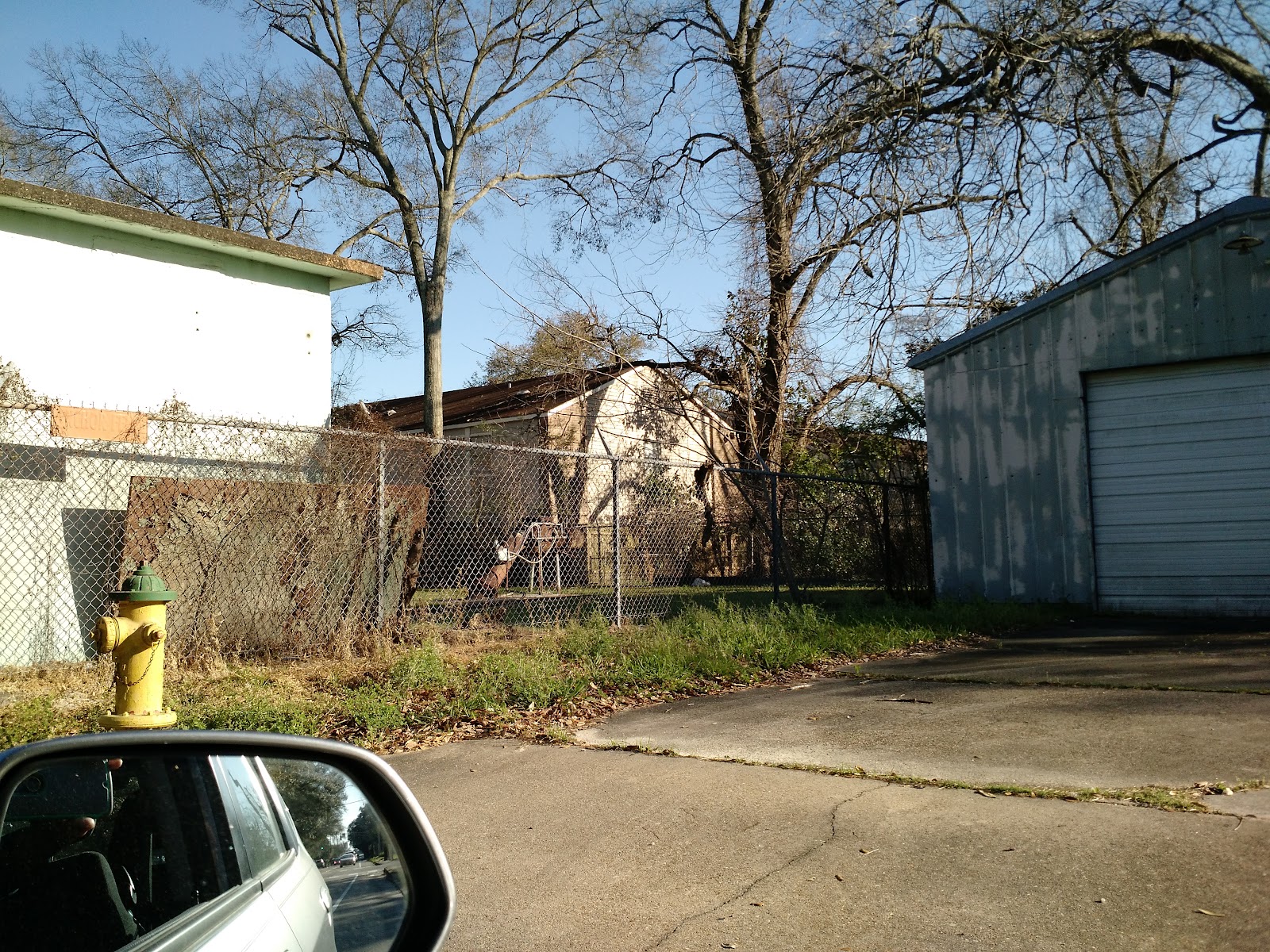 Iconic Structures
Throughout the I-49 Connector discussions and resident protests, we have heard of plans to build an ill-described bridge to signify the progressive nature of Lafayette. This seems to have moved forward and influenced the proposal for a Gateway Feature (project Gateway B). First, this is an idea that is ripe for ridicule. It is hard to see why the LCG and DOTD would provide such an opening in a community that can’t even fund a school tax. Tax opponents will use this as a hammer to destroy the whole ECI and Con programs. Second, we already have a beautiful gateway structure, our visitor center. We need a gateway that embodies Cajun and Creole culture, not a steel bridge or weird art. Those are fine for other places, but people visit us for the culture, and the current visitor center represents us very well. I am deeply saddened that DOTD plans to destroy the current center, and have been told that replacement will need to be at Parish taxpayer expense because we should have known better than to build it at its current location! In summary, rebuild the visitor center if the I-49 Con is ever built, and otherwise no iconic structure is needed..

Clay quarry
We have noticed that you plan to put a new park (project Gateway E) at what I believe is the old Clay quarry near the historic Lafayette brickyard and clay quarry (see The Attakapas Country: A History of Lafayette Parish, Louisiana by H. L. Griffin, p 52 and further) . This site is historically important in Lafayette. It is my understanding that most of the bricks for the old buildings in Lafayette came from this site. After the quarry was abandoned, it became a swimming hole for many of the young people in the city of Lafayette. The cool water that flowing freely from the now unconfined artesian aquifer must have provided cool recreation on hot days for many youth. However after two children drowned the council decided to fill the quarry. I am told that any fill materials that were available were used in filling the quarry including waste, trash and garbage - any sorts of materials that were no longer wanted. Today it is likely that this site not only provides contamination to the underlying aquifer and our water wells, but also may be a health hazard to nearby residents. Caution should be exercised in building a park at this location.

Again, I thank the ECI team for the opportunity to provide public comment.
Posted by Mike at 9:09:00 AM